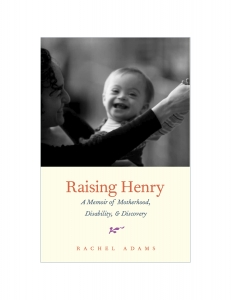 Rachel Adams’s life had always gone according to plan. She had an adoring husband, a beautiful 2‑year‑old son, a sunny Manhattan apartment, and a position as a tenured professor at Columbia University. Everything changed with the birth of her second child, Henry. Just minutes after he was born, doctors told her that Henry had Down syndrome, and she knew in that moment that her life would never be the same.

In this honest, self‑critical, and surprisingly funny book, Adams chronicles the first three years of Henry’s life and her own transformative experience of unexpectedly becoming the mother of a disabled child. A highly personal story of one family’s encounter with disability, Raising Henry is also an insightful exploration of today’s knotty terrain of social prejudice, disability policy, genetics, prenatal testing, medical training, and inclusive education. Adams untangles the contradictions of living in a society that is more enlightened and supportive of people with disabilities than ever before, yet is racing to perfect pre‑natal tests to prevent children like Henry from being born. Her book is gripping, beautifully written, and nearly impossible to put down. Once read, her (or her family’s) story is impossible to forget.

“A professor whose own research focused on the tradition of the freak show, Adams is well-suited to explore the meanings of disability — and her affection for the “rebellious individuality” of the so-called freaks gives her a kind of courage with which to help her son. Generous and honest, Adams politely rejects some of the frames others want to put on her family. Henry isn’t an angel, she isn’t a saint. “We didn’t plan for things to happen this way,” she writes, “but our lives weren’t tragic.” –Karen Tuttle, Boston Globe

“This is a terrific book—gorgeously written, beautifully realized.”—Michael Bérubé, author of Life as We Know It: A Father, a Family, and an Exceptional Child
“Rachel Adams’ Raising Henry: A Memoir of Motherhood, Disability, and Discovery is a must-read, moving, thought-provoking, important. I highly recommend.”—Jon Colman, President, National Down Syndrome Society

“With extraordinary eloquence and breathtaking honesty, Rachel Adams has allowed us to share every intimate moment of the profound journey of parenting her son Henry. I found myself savoring every beautifully chosen word. This is a remarkable memoir!”—Emily Perl Kingsley, author of “Welcome to Holland” and writer for Sesame Street

“Raising Henry is not just a forthright and poetic family chronicle; it is a provocative exploration of Down’s syndrome, disability, and what it means to be human. Adams is feisty, compassionate, and brilliant.”—Penny Wolfson, author of Moonrise: One Family, Genetic Identity and Muscular Dystrophy

“Adams succeeds in the difficult task of rendering intensely personal material in a way that makes any reader reflect on larger cultural questions…This book should be mandatory reading for all medical students, especially those entering the fields of obstetrics and gynecology.” —Georgina Kleege, author of Sight Unseen and Blind Rage: Letters to Helen Keller

“This book is a composite of the challenges and enjoyments of the first few years of a child with special needs and the family.…Very useful for parents, family members, but also professionals including physicians, nurses, therapists, and genetic counselors.”—Fran Hickey, M.D., Director of the Sie Center for Down Syndrome, Colorado Children’s Hospital

“We learn from Adams what it means to have a son very different from most others in mind and body, whose future is uncertain, but whose life is infused with love and so worth living.” –Jerome Groopman, New York Review of Books

“Characterized by a poignant honesty and great integrity, probing intelligence and nuanced thinking, this is a wise, admirable, illuminating book.”—Priscilla Gilman, author of The Anti-Romantic Child: A Story of Unexpected Joy

“Rachel Adams brings us along on her personal journey, and, along the way, we all discover that exceptionality is not ultimately defined by our genetic beginnings.”—Brian Skotko, M.D., M.P.P., Co-Director, Down Syndrome Program, Massachusetts General Hospital

“To Ms. Adams, the idea that her son’s very existence requires an explanation — that he is here because of some failure of medical science — is appalling. Her book is less a memoir about mothering a child with Down syndrome than it is her attempt to set people straight. The syndrome is a disability, as she makes clear, not an illness and certainly not a tragedy.” —Susannah Meadows, The New York Times

“Because Adams is the kind of person who, I suspect, writes in order to discover what she thinks, this book reads as the probing of an intelligent woman trying to make sense of her son’s disability, trying to give it context and meaning. It also shows how well Henry is loved and educated–in short, raised.” —-Anne Kaier, Wordgathering

Susannah Meadows, “A Disability, and a Mother’s Embrace.”  The New York Times 16 December 2013.

Allison Stevens, “Being ‘Different’ in a World of High Achievers.”  Symposium 6 October 2013.

Glen Altschuler, “Up from Down” Psychology Today 17 September 2013.

Alison Piepmeier, Review of Raising Henry.  Every Little Thing 23 May 2013.